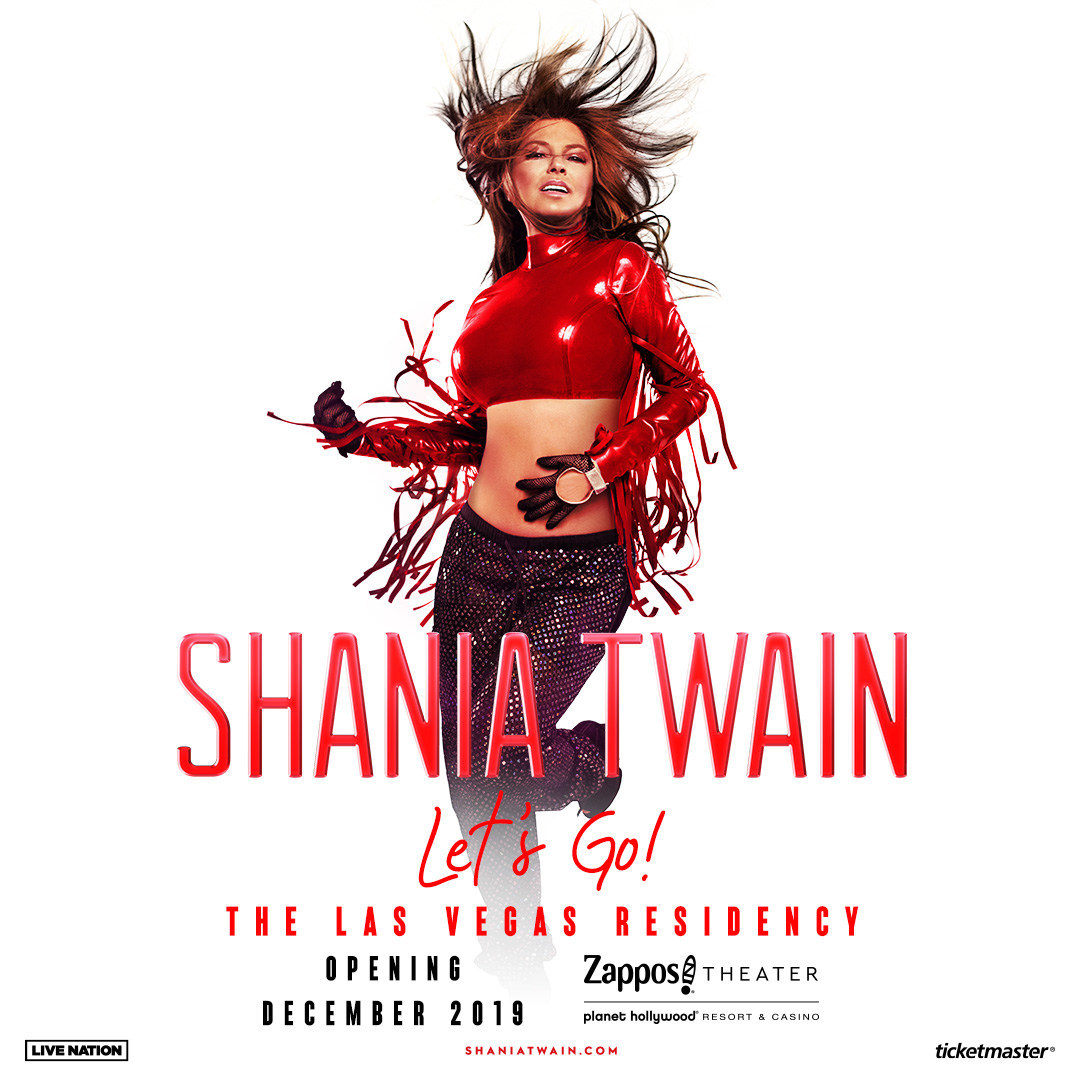 One of music’s most renowned trailblazers and the top-selling female country artist of all-time, Shania Twain, is returning to the Las Vegas Strip with Shania Twain “Let’s Go!” The Las Vegas Residency, opening at Zappos Theater at Planet Hollywood Resort & Casino on Friday, Dec. 6, 2019.

Shania will serve as creative director for her new Las Vegas show, combining her three decade-long career with inspiration from her iconic videos and elements from her 2018 sold out global NOW tour. This country rebel at heart will push the boundaries in Vegas, just as she always has done, taking fans on a journey of nostalgia and blowing them away with outside-the-box concepts and visual spectacles.

General ticket prices begin at $60 plus applicable tax and fees, and may be purchased online at ticketmaster.com/shaniavegas or in-person at the Planet Hollywood box office. All shows begin at 8 p.m.

Additionally, Shania, Live Nation Las Vegas and Caesars Entertainment have announced that $1 of every ticket purchased to Shania Twain “Let’s Go!” The Las Vegas Residency at Planet Hollywood Resort & Casino will be donated to Shania Kids Can. Established in 2010 by Shania Twain, Shania Kids Can (SKC) provides services that promote positive change in children’s lives in time of crises and economic hardship. SKC provides children with one-on-one consultations, academic support, group activities as well as nutritious snacks and meal programs where needed, all while in the safe, confidence-building environment that is the Shania Kids Can Clubhouse. For more information about Shania Kids Can, please visit: www.shaniakidscan.com

SHANIA TWAIN
Shania Twain is a five-time GRAMMY winner and the reigning Queen of Country Pop. With more than 90 million albums sold worldwide and U.S. sales topping 34.5 million, Twain remains the top-selling female country artist of all time. Twain’s albums include Shania Twain, Twain’s Platinum-selling 1993 debut; The Woman in Me, her GRAMMY Award-winning, Double Diamond-selling 1995 release; Come On Over, the best-selling studio album in Soundscan history by a female artist in any genre and the best-selling country album of all time with over 40 million units sold worldwide; and UP!, Twain’s third consecutive Diamond-selling album release.

Recognizing her indelible impact and achievements in music, Twain is the first and only female to receive CMT’s Artist of a Lifetime Award and she recently received the Icon Award at Billboard’s Women in Music ceremony. Twain’s hits include “Any Man of Mine,” “That Don’t Impress Me Much,” “You’re Still the One” and “Man! I Feel Like A Woman!” Shania’s first album in 15 years, NOW, was released in September 2017 and debuted at No. 1 on the Billboard Top 200 albums, making it the first female country release in over 3 years to top the all genre chart. Additionally, the album landed at No. 1 on the Billboard Top Country album charts and went to No. 1 in Canada, Australia and the UK. The release of the album was followed by a year-long sold-out World Tour. 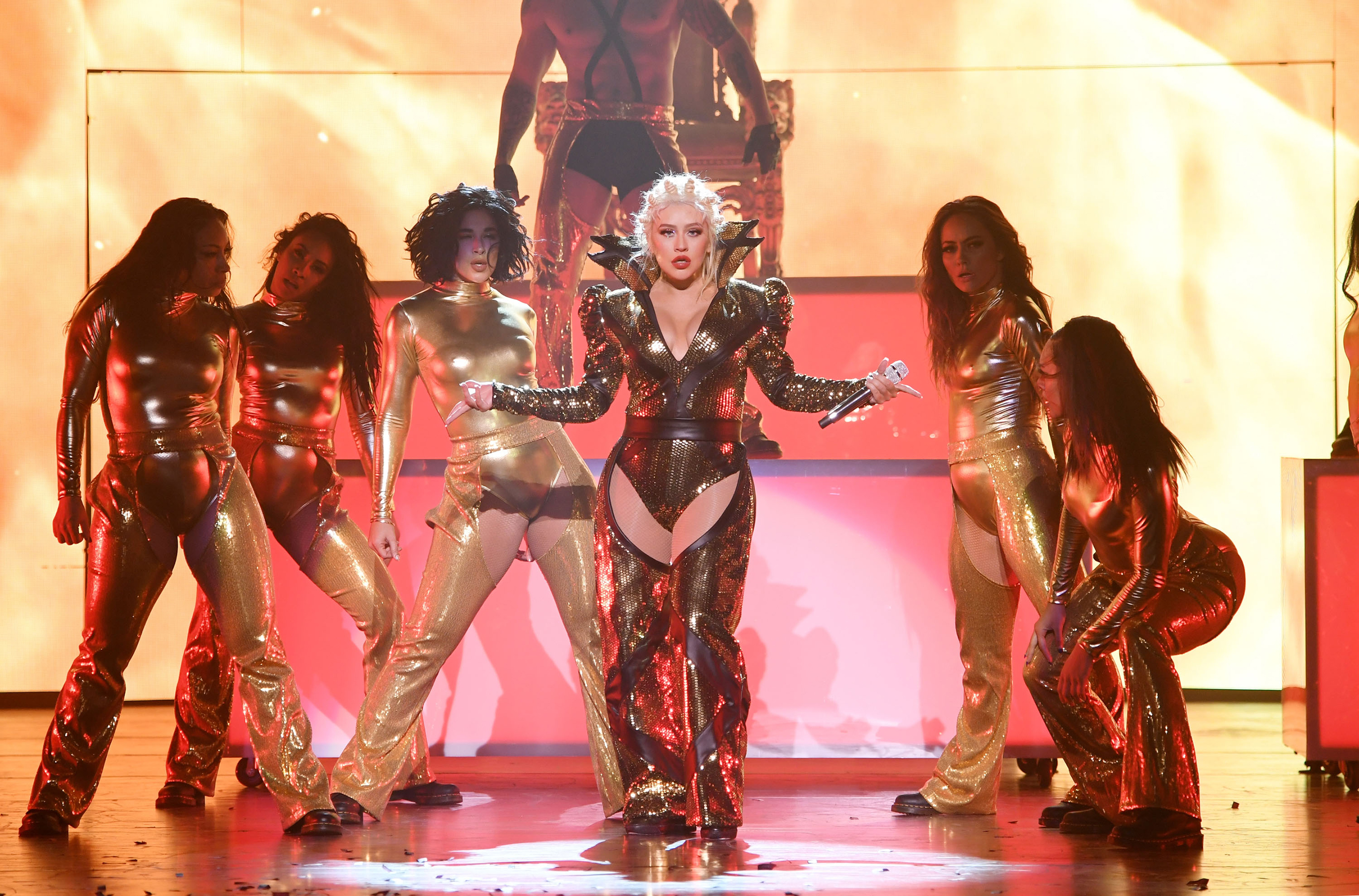 Designed exclusively for Zappos Theater and promoted by Live Nation and Caesars Entertainment, Christina Aguilera: The Xperience is a multi-sensory immersive experience engaging the audience with enigmatic vocals, spectacular visuals and surprising scents. Christina brings her audience through a journey of her music, showcasing some of her global hits including “Genie in a Bottle,” “Beautiful,” “Dirrty” “Lady Marmalade” and “Ain’t No Other Man.”

Tickets for performances of Christina Aguilera: The Xperience through October 2019 are now on sale. A limited number of LaneOne Premium VIP Packages are also available, including amazing seats, transportation, preferred entrance and more. Check here for details. General ticket prices begin at $60 plus applicable tax and fees, and may be purchased online at www.ticketmaster.com/Xtina or in-person at the Planet Hollywood box office. All shows begin at 9 p.m.

Additionally, Christina Aguilera, Live Nation Las Vegas and Caesars Entertainment are donating $1 of every ticket purchased to Christina Aguilera: The Xperience at Planet Hollywood Resort & Casino to The Shade Tree, Southern Nevada’s only 24-hour accessible emergency shelter for women and children in crisis, servicing many who are victims of domestic violence and/or human trafficking.

Christina Aguilera is a six-time GRAMMY Award-winning singer-songwriter renowned for her powerful voice and hit songs. Throughout her career, she has sold more than 43 million records worldwide. Aguilera has achieved five No. 1 singles on the Billboard Hot 100 chart making her the fourth female artist to top the chart over three consecutive decades (1990s, 2000s, and 2010s). She has received a star on the Hollywood Walk of Fame and holds the prestigious honor of being the only artist under the age of 30 included in Rolling Stone Magazine’s list of the 100 greatest singers of all time. In 2011 she entered the world of television as a coach on NBC’s Emmy Award nominated show The Voice. Aguilera has served as global spokesperson for Yum! Brands’ World Hunger Relief effort since 2009 and has helped raise over $150 million for the World Food Program and other hunger relief agencies.